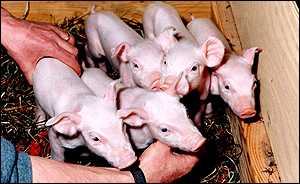 Even the hardened Russian police were horrified. In the nick of time, they had rescued five-year-old Andrei in a small city near Moscow. He had no idea he was about to be sold for the equivalent of $90,000, nor that his sellers were his own grandmother and uncle. Nor could he imagine that the buyer wasn’t interested in the whole "package" – just the kidneys, eyes, and possibly heart and lungs.

Someday, researchers will be able to grow new organs for us before we need them. But until then, our best hope lies in xenotransplantation. This means transferring organs such as hearts, kidneys, lungs, and livers from pigs or other animals to humans.

Pig heart valves have routinely been used in humans since 1964, but they contain no live cells. Cook Biotech, Inc. of West Layette, Indiana is already using freeze-dried pig intestinal lining as pig patches, for everything from closing up large sores, to regrowing cartilage in knees, to reinforcing the abdominal wall during hernia operations. The pig patch initially seals the area, and then acts as a scaffolding to allow the body to build new tissue while the porcine cells are absorbed. Rejection is never a problem. 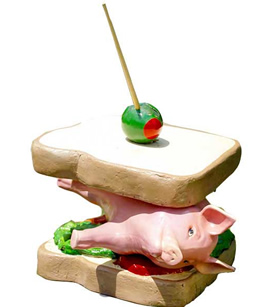 There are far nobler purposes for pigs than the ham sandwich.

The problem arises with the transplantation of whole organs. Whether porcine or primate, rejection is quick and untreatable. The most promising method for overcoming rejection is biotechnology. By inserting human genetic material – preferably the recipient’s own – into pigs or other donor animals, the human body should recognize the new organ as its own.

Since pig organs are the right size for humans, and since swine are cheap and easy to breed, scientists have long considered them potentially the best donors. But "when you transplant a pig organ into a nonhuman primate, it is rejected immediately," John Logan of Nextran, Inc. in Princeton, New Jersey told the New York Times. "It just turns black before your eyes, within 30 minutes."

The reason is a pig gene called GGTA1, which directs the production of an enzyme that attaches sugar molecules to cells in their bodies. These are instantly recognized as foreign in primates and attacked. (Alas, there’s no breed of pig with NutraSweet genes.)

The best way to make sugar-free pigs would be to created cloned pigs with the genes "knocked out" (rendered inactive) that are responsible for producing GGTA1 and to breed them.

PPL Therapeutics of Scotland, the makers of Dolly the sheep, did just this. It became the first company to clone pigs, then later it made cloned pigs that lacked the sugar gene. Shortly thereafter, Immerge BioTherapeutics of Boston announced it too had developed swine worthy of having pearls cast before them, with miniature GGTA1-less pigs whose organs would better fit humans.

Now companies are working to defeat the rejection problem that plagues all transplants, whether from pigs or people. PPL’s spin-off company, Revivicor, Inc. in Blacksburg, Virginia, has just announced it has succeeded in making baboons live as long as 81 days with sugar-free pig kidneys.

One worry with pig xenotransplantation is the possibility of transmitting viruses. In fact, we catch lots of viruses including the flu from pigs and other animals. Still, organ transplants should always be disease-free. One study did show that porcine endogenous retroviruses (PERVs), which are integrated into pig genes, replicated in mice that had severely weakened immune systems. Fortunately, PERVs have not been shown to cause disease. Further, "There are no known viruses in the pig genome that have caused disease in man," according to Khazal Paradis, the director of clinical research at Imutran Ltd. in the U.K.

But the potential for such viral spread hasn’t been ruled out. Happily, for every biotech problem somebody always comes up with a solution. Indeed, Immerge Biotherapeutics has now bred miniature pigs that don’t produce PERV capable of replicating in human cells, even though it also found that its inbred miniature swine do not transmit PERV viruses to human cells.