What a difference a year makes. Twelve months ago many people associated "biotech" with the Martha Stewart insider trading scandal, which began when the Food and Drug Administration rejected a biotech drug. 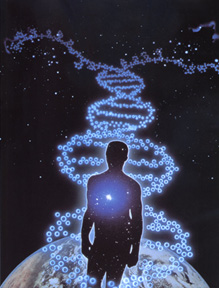 Biotech is busting out all over.

This year, the celebrity name associated with the industry is George W. Bush, who in late June became the first president to address the annual Biotechnology Industry Organization convention in Washington. Oh and that drug that kicked off last year’s scandal, Erbitux? It was so effective in a recent cancer trial that it’s applied to the FDA for "fast track" approval.

With apologies to Rodgers & Hammerstein, biotech is busting out all over.

Proof was in the four-day BIO conference itself. It featured more than 16,000 attendees from 55 countries, more than 1,000 speakers, and packed in 1,000 exhibits displaying the stunning progress that biotechnology is making in medicine, agriculture, environmental cleanup and other areas.

Biotech sales and revenue were the highest ever in 2001, the last year for which solid data are available. That in turn fueled the most the industry has ever spent on research and development.

Last year the FDA granted approvals or new uses for 35 biotech vaccines or drugs, the most ever in a single year and 50 percent more than the year before. Some are incremental improvements. Others are outright miracles, such as Novartis’ Gleevec, a pill that reverses the progression of a deadly form of leukemia and appears effective against several other types of cancer as well.

More than 325 million people worldwide have been helped by the more than 155 FDA-approved biotechnology drugs and vaccines, according to BIO. Seventy percent of these were approved in just the last six years. 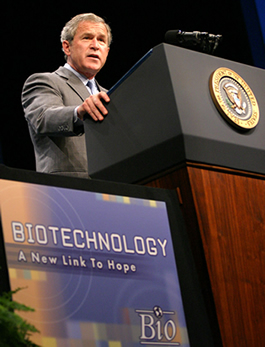 Colon cancer is the second greatest cause of cancer death in this country, but two biotech breakthroughs against it were announced at an oncology conference last month. One involved ImClone’s Erbitux which, when combined with chemotherapy, shrank colon tumors by 50 percent or more in almost one fourth of patients. Another was Genentech’s Avastatin, which significantly extended the lives of patients by cutting off the blood and nutrient supply to their colon tumors. Biotech crops have become so firmly established that anti-biotech groups such as Greenpeace didn’t even bother getting out their Frankenstein’s monster suits to picket the convention.

Globally, between 1996 and 2001 the area planted commercially with biotech crops increased 35-fold and total acreage is now three times the size of Great Britain. Yet 12 percent more was planted in 2002, so that more than one-fifth of the global crop area of soybeans, corn, cotton and canola acres are now genetically engineered.

In his speech, Bush emphasized biotech’s role in fighting bioterrorism. Indeed, the industry is developing a plethora of testing devices, cleaning agents, vaccines and antidotes. Many are already in use.

The SARS virus wasn’t a bioterror agent but labs mapped out its entire genetic sequence in a mere 10 days, allowing scientists to immediately begin probing it for weaknesses. If they can do it with SARS, they can do with bioweapons as well.

"Bioremediation," or the use of plants and micro-organisms to clean up toxic or nuclear waste areas, continues to catch on with companies finding it’s both cheaper and more eco-friendly than old-fashioned techniques that scar the earth and dredge up contaminated mud from lakes and rivers.

Biotechnology won’t solve all of our problems. It may double our lifespans, but it won’t keep us from wasting that time on "reality TV." It won’t block spam, stop Madonna from making films or prevent my cat from piddling on the carpet.

But as Bush told the attendees at BIO 2003, "In the years to come, the contributions of your industry will help us to win the war on terror, will help us fight hunger around the world and will help us to save countless lives with new medicines."

And that’s just for starters.