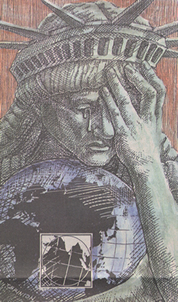 You’ve seen the horrific images of walls of water rushing up beaches, sweeping away everything – and everyone – in its path. You’ve seen the dead piled up like cordwood, wounded survivors, and persons collapsing upon hearing their entire family has vanished. Alas, you may not have seen the worst.

Dr. David Nabarro, head of crisis operations for the U.N. World Health Organization, warned that disease could take more lives than the waves. "The initial terror associated with the tsunamis and the earthquake itself may be dwarfed by the longer term suffering of the affected communities,’’ he said.

The main enemy is pestilence that can come from many different sources and cause a bewildering number of deadly diseases. Many are contracted from contaminated water that, according to Gerald Martone of the International Rescue Committee, can carry more than 50 diseases.

These include typhoid fever, dysentery, and one of history’s greatest killers, cholera. Cholera causes a combination of diarrhea and vomiting, and death can come within hours. Typhoid fever and dysentery can be treated with antibiotics, though such drugs have limited use with cholera. With both dysentery and cholera, the primary treatment is oral rehydration with a mixture of water, salts, and sugar.

Once any of these take hold, there can be hell to pay for years to come. The key to prevention is killing the disease-causing organisms in water, preferably with chlorine. Boiling works temporarily, but any untreated water can become quickly contaminated. 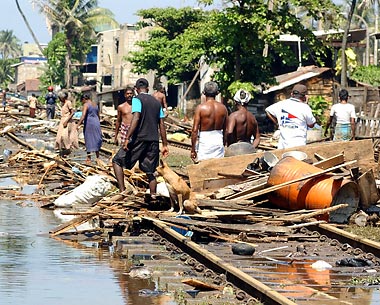 Without our help, those now looking for the dead will be among them.Malaria and dengue fever, both carried by mosquitoes, are already endemic in many of the affected areas and disease levels could dramatically increase as they breed in the countless pools of stagnant water left behind by the waves. Mosquitoes that carry malaria come out at night, those that carry dengue by day. They thus kill around the clock.

Yet notes Paul Driessen, author of Eco-Imperialism and senior policy advisor for the Congress of Racial Equality, "DDT is not only probably the most effective mosquito killer on earth, it’s also been tested for literally decades and has never been shown to harm people." It’s questionable whether it even has any impact on the environment. There are other insecticides available, Driessen observes, but "they don’t have the repellency of DDT and a single DDT spraying lasts six months." 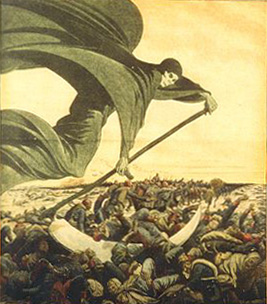 A Portrayal of Cholera from 1912

He says DDT should be sprayed on water pools, tents, and on people themselves – as indeed was once common in Sri Lanka and throughout most of the world. "We need to ignore the environmentalists and concentrate on immediate health dangers," he says. Incidentally, by and large environmental groups also oppose water chlorination.

Greenpeace specifically wants to eliminate all uses of chlorine, thereby setting the world clock back by over a century and ensuring that we in the West would be too busy fighting epidemics to help others with theirs.

Typhus, spread by fleas and lice, could also become epidemic and DDT has an excellent track record in preventing it since it was first dusted on Italian war refugees in 1943.

One bright note is that "contrary to popular belief," according to WHO’s Pan American Health Organization, "there is no evidence that corpses pose a risk of disease ’epidemics.’" That means we can have priorities other than disposal of remains. However, adds PAHO, bodies can pose a threat if cholera was the cause of death. Rapid corpse disposal would then be imperative.

It sounds trite, but every day truly counts. There is a tipping point with pestilence. Once a critical mass of illness is reached, the numbers explode. Yet the organization jostling to take the lead in providing relief, the U.N., has in previous crises proved itself to be a snail with arthritic knees. Look at what it accomplished – or more to the point failed to accomplish – in Rwanda and Darfur. The more who die, the faster the U.N. twiddles its thumbs.

The U.S., other governments, and private relief organizations must be willing to push the anemic Kofi Annan aside and deal directly with governments in the disaster areas. We can play politics later; the time to save lives is now.