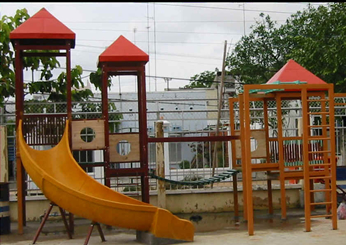 If some groups get their way, school playground sets may go the way of the dodo.

Safety bureaucracies and consumer activist groups routinely invent or exaggerate dangers to maintain their budgets and inflate their apparent worth. And nothing works better than saving children who are already safe. So it is with the current joint attack of the Consumer Product Safety Commission and the Environmental Working Group on something called chromated copper arsenate.

The working group in May released a typical activist group pseudo-scientific "study" with the catchy title "Poisoned Playgrounds," demanding that all arsenate-treated wood on playgrounds be ripped out faster than the proverbial woodchuck chucks. So far, the commission has only produced a panel study that neatly ignored the huge amount of scientific data available. But it paves the way for the commission to ban the treated wood from playgrounds – or even porches or decks.

Chromated copper arsenate, as the name implies, contains a form of arsenic. It works terrifically on pressure-treated wood to keep termites and fungi from chowing down, but regulators including the EPA believe arsenic causes several types of cancer. The worry is that kids may be harmed by exposure either to soil below the wood or by direct contact with the playground equipment itself.

But 500 years ago a fellow named Paracelsus coined the expression "The dose makes the poison." Arsenic is a terrific example. It’s in the air you breathe, the water and other liquids you drink, and in virtually every type of food imaginable. If there weren’t safe levels of arsenic consumption, you’d be reading this from six feet under.

All soil also contains arsenic and we all breathe in soil particles. Concentrations found in dirt under arsenate-treated wooden decks range from no detectable level to 300 milligrams per kilogram. Yet the highest amount found would still provide less than one-twelfth the average exposure to arsenic than a child receives merely in drinking water.

So if we’re to ban arsenate-treated equipment, we’d better ban food, air, soil, and especially water – which alone counts for about 93 percent of arsenic intake.

Nobody really knows the exposure a child receives from direct contact with equipment because there are so many variables in the myriad models. These include how often a child touches the equipment, how often that hand touches the mouth, and so on.

Of course, there are alternatives for outdoor physical activity.

But while the working group and commission panel have slapped together models showing children at risk, many previous analyses – including those by the commission itself – have found little chance of harm.

Thus the state-appointed Florida Physicians Arsenic Workgroup concluded last year that, "The available data have not demonstrated any clinical disease associated with arsenic exposure from (playground equipment) of the CCA-treated wood."

Likewise, last year when industry sought to dampen whipped-up hysteria by voluntarily agreeing to stop making the wood for residential use by 2004, the EPA declared it "Has not concluded that CCA-treated wood poses unreasonable risks to the public (when) used around or near their homes or from wood that remains available in stores," nor that there’s "any reason to remove or replace CCA-treated structures, including decks or playground equipment."

You also needn’t be hit over the head by an arsenate-treated two-by-four to realize banning the wood may cause real risks. Alternatives are considerably more expensive, plus there’s the labor cost of ripping out the old equipment for the new. Thus many school districts on a tight budget (and aren’t they all?) will remove but not replace. It’s already happened in some schools.

"My message to parents who are worried and are considering keeping their children off of public playgrounds is simply this: relax, the evidence is that your children are safe," testified former Health and Human Services Secretary Louis L. Sullivan at a commission hearing last March.

Rather, "The far greater risk to our children is allowing them to be sedentary and spend their free hours in front of a television screen instead of in the playground," he said. Noting that a third of our children and adolescents are overweight, he added "Obese children grow up to be obese adults (which) is associated with increased risks of diabetes, heart attack, stroke and other diseases."

Sullivan also pointed out a greater danger, "the tendency in our society to devote tremendous attention and resources to phantom risks, based on an anecdote or a media report." The real issue here isn’t wood at all; it’s how do we keep our children safe from those who would do them harm under the pretense of protecting them?