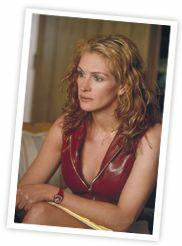 Really stuck it to them, she did. True story. Won a $333 million settlement from Pacific Gas & Electric on behalf of plaintiffs from the tiny desert town of Hinkley, Calif., who got cancers, nosebleeds and everything in between because the company had polluted the water supply with chromium 6, a rust inhibitor. The company tried to cover it up, but Brockovich, a mere file clerk, broke the conspiracy and picked up a cool $2 million bonus herself.

An American success story. Makes you feel good all over.

Except that perhaps the movie got it wrong. To my surprise, someone actually has challenged this well-made movie as so much Hollywood mythology. Michael Fumento, a senior fellow at the Hudson Institute, did it in a March 28 Wall Street Journal op-ed piece, "’Erin Brockovich,’ Exposed." No single pollutant, he wrote, could have caused more than a handful of the health problems described, let alone all of them. Chromium 6 is a carcinogen only when inhaled, not ingested. Cancer rates in two company plants, including in Hinkley, were no higher than in the general California population, and death rates were significantly lower than expected. PG&E settled only to avoid further litigation costs.

To which Brockovich and an attorney vehemently responded in a longer April 6 letter to the editor: Fumento blithely ignores the medical research. Fumento ignored the "facts" that PG&E "poisoned" people. To which Fumento responded with an even longer letter to the editor on Monday in which he . . . oh, well, forget it.

Personally, as I sat through the movie with a reporter’s skepticism, I was uneasy about how one-sided it was, that no one ever is so entirely right and the other side so entirely wrong (read: evil) and that no one ever would make a movie from the opposite viewpoint. Fumento suggested that Brockovich, a person with no medical background, irresponsibly managed to convince many people suffering from a multitude of unrelated health problems that they were victims of a big, bad company with deep pockets.

That, of course, is the one provable point in this entire fight. Who would make a movie about how shareholders of a big company are victimized by an ignorant lot of suffering rubes who were manipulated by greedy attorneys, who themselves skimmed $133.6 million off a $333 million settlement? Which got me to thinking. That’s just the start of a long list of movies you’ll never see come out of Hollywood:

You’re welcome to add your own.