The jig seems to be up on the runaway-Toyota scare. Mounting evidence indicates that those Toyotas that are truly suddenly accelerating can probably be explained by sliding floor mats (since fixed) and drivers hitting the gas instead of the brake. That is, the media have been chasing a will o’ the wisp for the better part of a year, whipping car buyers and Congress into a frenzy.

Where are Woodward and Bernstein when you need them? Shouldn’t the accounts of alleged unintended acceleration deaths have been subjected to a little checking?

Remember the tale of the runaway Prius on a freeway near San Diego? In my Forbes.com exposé in March I observed that much of what the driver told reporters was absurd. He insisted he was “afraid” to try to shift into neutral because he needed both hands on the steering wheel; nobody asked about that cellphone he’d been holding while driving. Likewise, the media pack is so focused on the number of those deaths supposedly from sudden unintended acceleration, now put at 93 from 75 crashes, that it can’t be bothered to properly investigate them—or indeed even look at them. Otherwise it could have told you what I found: that most of the claims are spurious, even to the point that some of the accidents never even occurred. 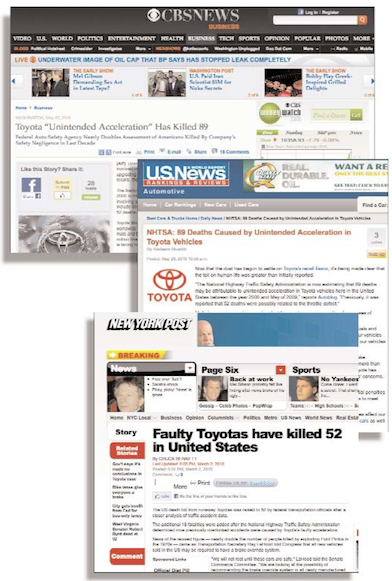 The National Highway Traffic Safety Administration uses the term “allegedly” in listing the number of deaths possibly related to unintended acceleration. Yet too many reporters ignore that caveat. Thus, a U.S. News & World Report blog-post headline proclaimed: “NHTSA: 89 Deaths Caused by Unintended Acceleration in Toyota Vehicles.”The Los Angeles Times stated in a headline that sudden acceleration “led to” the deaths.

A New York Post headline early on declared that faulty Toyotas “have killed” 52 people. A CBS News Web headline (over an Associated Press story) similarly said the acceleration car fault “has killed” 89. (USA Today has been more careful in emphasizing the tenuous connections.)

The NHTSA “complaint database,” available on its website, amounts to a motley collection of anecdotes, many of them absurd. Anybody can enter anything. An entry filed by someone named “Damnable Liar” claimed his car accelerated to the moon because of a child seat problem. That was mine.

Many “complaints” are merely comments, and since NHTSA has no “sudden acceleration” category but rather uses “speed control,” the sudden-acceleration claims are lumped in with entries regarding vehicle sluggishness. But in the media conversion process they all become runaway Toyotas.

After the frenzy began, seven entries comprising ten deaths, originally blamed on other aspects of the cars, were refiled as unintended acceleration. Many simply deduce that since investigators found no cause other than driver error, then the accelerator must be responsible. Or they make the illogical deduction that since the brakes weren’t applied, it was sudden acceleration.

One entry concerns Joseph Mele, whom court records say last August crashed into a guard rail at over 100mph while driving a Toyota Scion. His best friend was trapped and burned alive. Witnesses testified he’d been smoking pot and was plastered, and a police officer testified he smelled strongly of booze. He’s awaiting trial, charged with, among other crimes, vehicular homicide while driving under the influence of alcohol (something the Los Angeles Times, a Pulitzer Prize finalist for its Toyota coverage, failed to mention in a February story).

His mother nonetheless entered a NHTSA complaint against Toyota. And then she entered 7 other Scion accidents under “speed control” that she found online, totaling 12 deaths. She told me “police quotes” indicated they were unintended acceleration. Yet some clearly contradicted her assertion. How many of those 7 accidents NHTSA includes in the 93 isn’t clear, and the agency won’t say. But the fact that at least 22 deaths come from news reports proves that the 93 total includes some of them.

All of which helps explain why of the alleged 93 deaths, NHTSA has attributed only 5 to an acceleration defect. It doesn’t explain why huge media outlets with teams assigned specifically to cover Toyota somehow missed all this.